This article was the cover story in the August 2017 issue of The Keys to Recovery Newspaper. Overcoming this habit is one of the major keys to a successful recovery from all addictions! Here’s how to do it: 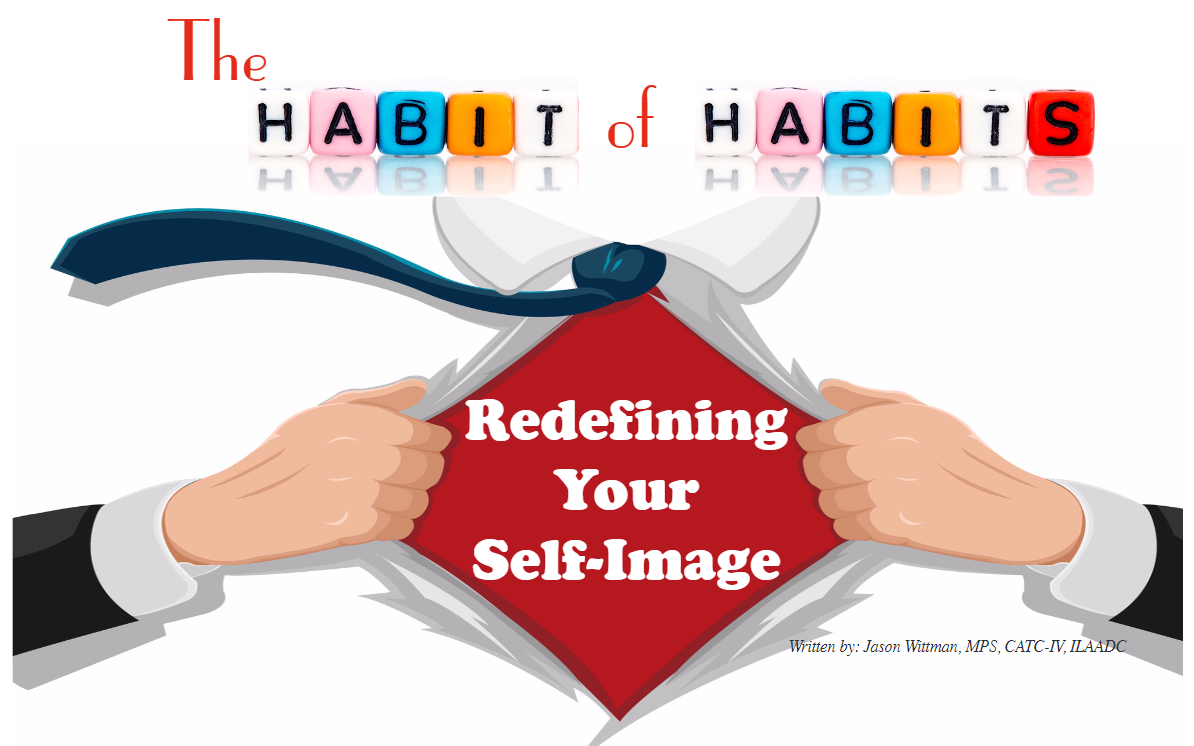 The Habit of Habits

In the Steps 6-7, we get to work on eliminating character defects, most of which are bad habits. We are about to expose the worst of those habits and suggest how to deal with it.

I start with the assumption that the root cause of all addictions is the lack of self-esteem.  The Habit of Habits, thinking and acting like a loser, serves to perpetuate and reinforce those feelings of little or no self-esteem.  As I found in my hunt for the root cause of all addictions, listening to recovery stories also provides many clues regarding the Habit of Habits.  Besides the theme of “that empty hole inside” the other recurring theme is are descriptions of having felt or still feel “less than” their peers and for many, feeling “less than” back into early childhood.

Notice that I say thinking and acting like a loser without describing people as losers.  People are not losers. They just have gotten in the worst of all habits of thinking and acting like one. Because their life’s experience has not given them the tools for building self-esteem, over time start thinking of themselves as “less than’ all those who have what they admire.

Those feelings are acted upon in many quite dissimilar ways. Some folks just stop trying to be successful and choose to live lives of quiet desperation. They are the classic Underachievers. Underachievers are usually wrongly viewed as having a lack of motivation. To the contrary, these people are very well motivated to underachieve. It takes a lot of effort for someone with a lot of native abilities and intelligence to opt out of using them. What they are doing is voluntarily taking themselves out of the competition. In this way they never have to face their worst fear, “failure.” They do not believe that they are good enough and would probably fail, so by not competing things sure that they will never fail. Unfortunately it also insures that they will never win.

Others become bullies in one form or another. They are people who feel like wimps inside and protect themselves by always being on the attack. For them, the best defense is a good offense. And these folks are experts at keeping others far enough away so that their inner, less than, feelings are never discovered.  I have a principle called “The Law of Opposites.” Anything of person must continually say or demonstrate about themselves is a great clue that inside they are feeling the opposite. People who feel real good, if not great inside, do not have to keep telling you or showing you how great or powerful they are. They just are who they are and do not need you to acknowledge that for them.

So how do people reinforce the habit of habits? Some of the ways are beating one’s self up at the drop of a hat, never giving one’s self the benefit of the doubt and being a perfectionist. Perfectionism is the ultimate of loser thinking and acting. Because Perfection is an unreachable goal, perfectionists judge their performance against perfection and always come up short. This supplies them with a continual source of negativity.  The only thing Perfectionists do perfectly is to beat themselves up!

Before I explain how to break the habit, little bit of theory on how to break any habit. It is important to understand, habits are controlled by the inner mind (which is sometimes referred to as the sub-conscious or unconscious mind). Once the inner mind understands that an action or way of thinking or behaving is normal and natural, it will automatically continue to do it forever. Willpower is a function of the outer mind (sometimes called the conscious mind). The reason willpower hardly ever works to overcome set habits is that the inner mind’s programs are way more powerful than the out of mind’s desires. The second reason why “willpower” is “won’t power” is that one of the major functions of the outer mind is to protect all inner mind programs. So the outer mind is in conflict with itself. On one hand it wants to change a habit for all sorts of logical reasons and on the other hand its marching orders are to run interference against any and all efforts to change that inner programming.

I’m not making this up. Ask anyone who has raised children.  They can probably remember that up to about the age of 12 their kids would follow any thinking that they were told. Young kids would unquestioningly follow their parents over a cliff. At about the age of 12 they started responding to everything by putting their hands on their hips, looking up and asking, “Why?” Until that point in their brain’s development, their outer mind function as the Guardian was non-existent so the inner mind would be accessible and ready to absorb any and all of the knowledge necessary to function for the rest of their lives, everything from language to toilet training. After that point, direct access to the inner minds ceases, as the outer mind assumes its role as guardian and protector,  which accounts for the “why” response.

Knowing this about the workings of the mind there are two major ways of changing inner mind programming. The first utilizes self-hypnosis programming and the other, by doing a new habit consistently long enough for the inner mind to understand that this is the new way of doing things. Once it gets it, it will do the new thing habitually. For most minor habits, 30 days of consistently doing the new habit is usually enough for the inner mind to get the message and alter its programming.  For major habits that have been practice for long periods of time, such as smoking or the one we are currently dealing with, loser thinking, it will probably take a longer period of practicing the new habit.

To effectively change habits this way takes an extraordinary amount of conscious awareness. There must be a constant vigilance of one’s actions to make sure that the old habit does not slip or creep back in. Any temporary slips back into the old habit resets the timer of how long before the inner mind accepts new replacement habit (way of doing thing) because the inner mind interprets the slip as, “Oh, I guess that new way was just temporary so I have no reason to change.” Self-hypnosis programming will greatly help to shorten the process because in hypnosis, the outer mind is gently invited to drift out of the way, which allows direct reprogramming of the inner mind.

My favorite method to change loser thinking is The Mirror Exercise. Because people who have the loser thinking will put themselves down and beat themselves up at the drop of a hat, I developed a new habit or practice that would counter that old one, one that could be done purposely and regularly. So here it is:

From now on and forevermore, every time you see your face in the mirror, you MUST smile and you MUST say something nice about yourself. The nice thing could be an external something such as you have a great smile or you’re good looking. The only caveat here is that it needs to be something that you truly believe without any reservation or consideration to be true about you. It could also be some internal qualities such as you are smart , considerate of others or would make someone a good partner. Anything as long as it is 100% positive and you believe it is 100% true about you.

Most folks, who are in the habit of beating themselves up, love to do so in front of mirrors.  If you catch yourself using the mirror to beat you up, you MUST say two positive nice things about you for every nasty one you just uttered or thought and then you MUST smile. Also, if one day you are not in the mood to smile or because you didn’t usually smile you think you don’t know how, then fake it but you must smile every time you see you.

By the way, if you beat yourself up in the mirror, you need to say to nice things for every nasty one. The best way to stop a habit is to do another one more.

What this exercise does is start a love affair with yourself, the foundation on which self-esteem is built.  Once you have developed that, you can truly become your own person and are on the way to personal happiness and success.

How do I know this is true? I originally developed this practice for me as I was the consummate loser thinker. I know it works and to this day, I still do it. And every client to whom I have taught it, reports the same results. A wonderful side benefits of this practice is that eventually your face becomes a trigger to an automatic smile and you can’t feel down or depressing yourself when you smile. So if you are drinking as much water as you ought to, you’ll have many opportunities to smile as you get rid of the excess water. If you happen to be in a funk as you’re going to the bathroom, that automatic smile will break that state and you have a chance to have a wonderful rest of the day!

[Permission to reproduce this article is granted as long as this notice and the “About the Author and the copyright information is included.]

*About The Author*
Jason Wittman, MPS, LAADC, CATC-IV (aka Successful People’s Secret Weapon) is the former Executive Director of Los Angeles Youth Supportive Services, Inc. ( http://www.la-youth.org ) and has had a private practice as a Counselor and Coach for over 40 years. His practice, http://Stage2Recovery.com focuses on coaching and advising business and professional clients, who are recovering from alcoholism and addictions, to work and live at their exquisite best. He is an expert on teaching and coaching the “getting-on-living,” self-esteem building and spirituality parts of recovery. He has his master’s degree from Cornell University in counseling-psychology and is certified as a drug & alcohol counselor, a clinical hypnotherapist and a practitioner of Neuro-Linguistic Programming (NLP). He can be contacted at jason@stage2recovery.com or 213-804-4408